How the SkinVision App Revealed my Husband’s Melanoma

As a Wellness Coordinator in the oil industry, Candy Lethridge, has been approached many times to trial different wellness technologies. Digital wellness technologies are undergoing a rapid transformation. They are now being offered as a part of many health programs to improve the health and wellness of both corporate and contract workers.

With Australian’s experiencing the highest incidence of skin cancer in the world, the SkinVision App stood out when it came across her desk as one to explore further.

From Perth, Australia, Candy falls amongst one of the highest risk groups for skin cancer. Australia, together with New Zealand, has the highest percentage of skin cancer cases in the world. It’s estimated that two in three will be diagnosed with skin cancer by the time they are 70.

Like many regions of Australia, the amount of sun that Perth sees throughout the year is causing a high risk. In the summer, a long streak of extreme UV exposure can be seen. This all means that a skin cancer check for anyone living in Perth is a smart idea.

In order to determine the applicability of the SkinVision App, Candy was provided with trial access to the application. 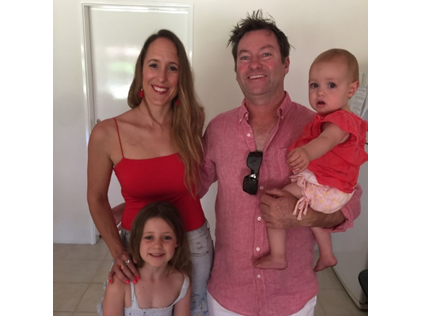 A mother of two girls aged two and seven, and wife, Candy thought it would be an excellent opportunity to scan a few spots of her husband’s, whose skin type is defined by freckles and moles and has a history of sun exposure.

These types of characteristics will typically cause the SkinVision skin type quiz to deem someone as being sensitive to sun exposure.

Candy scanned a few spots on her husband and received several low-risk indications, and to their surprise, the scans also revealed several high-risk lesions which prompted them to schedule a dermatologist visit.

“The dermatologist wanted to remove one lesion from my husband’s back, and we received the diagnosis you are never quite prepared for – confirmed melanoma.”

It had only been a few months prior that he had been advised by the GP he had no suspicious skin lesions.

“Thankfully this was caught in the early stages. I am confident to say the SkinVision App essentially saved my husband’s life.”

Candy’s husband is now attending four monthly scans with the dermatologist and through the process, he also discovered that a previous skin lesion removed over a decade ago at a skin clinic was also a confirmed melanoma. Unfortunately, the results of which had not been revealed to Candy or her husband as there was not an ongoing screening program suggested.

“We were oblivious to this until now and so thankful to have learned about the development of this skin spot.”

“As you can imagine this process has been quite confronting for both my husband and myself and we are just so thankful that we were lucky enough to catch things in time all due to this health technology and now have a proactive plan in place for early detection, which is key.”

SkinVision’s CE marked App helps people monitor their skin for signs of deadly cancer. To use it, a person takes a photo of their potentially cancerous spot, which the App then analyzes and – within 30 seconds – indicates the level of risk based on a comparison with millions of other skin images. The App also recommends the next steps to take, which may include a trip to the doctor for further examination if the spot is deemed high-risk.

As the colder months set in and Aussies begin to resume back to regular healthcare practices after COVID-19, taking time to evaluate the skin and any new spots is critical to ensuring the population can catch changes early.

SkinVision allows busy people or those living in rural communities the opportunity to receive fast information about their skin and prompt them to see a GP if needed.

SkinVision’s Medical Officer Mariana Romão said “Cases such as this, where Melanoma presents itself in a non-typical nature all too often go undiagnosed, severely restricting treatment options. We’re thrilled the service was able to help Candy’s husband catch this melanoma in time.”