Melanoma Monday – this is why you should care

Whilst obviously not on the list of anyone’s favorite holiday, it is one that delivers critical information for millions of people in the US and around the World.

The occurrence of melanoma is dependent on a number of factors, the most prominent being the risk factor of the population to suffer from the disease (most prominent in light-skinned Caucasians) and the amount of ultraviolet light that reaches them.

This has meant that countries such as Australia and New Zealand have found themselves at particular risk. 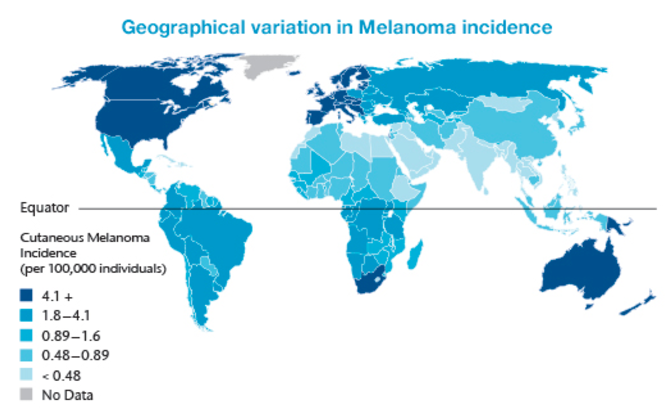 Australia has proven that these risks can be managed, however. In 2005 Australia’s per capita invasive melanoma peaked at around 49 cases per 100,000 people, the highest in the world.

Successive Australian governments had known for decades of the dangers faced by their population and have aggressively pushed public health initiatives such as the “Slip, Slop, Slap” suncream campaign, to ingrain safe practices within the population.

These campaigns have paid off, with incidents of melanoma falling steadily in Australia since 2011. Researchers now estimate that Australia’s per capita rate will have fallen to 41 per 100,000 by 2031, as Australians become ever more sun smart and aware of the dangers of melanoma and other skin cancers.

Read more: Why is skin cancer so common in Australia

In the United States

The prevalence of invasive melanoma isn’t as high in the United States, though it still stands at 22 per 100,000 and nearly 9,500 people are diagnosed with some sort of skin cancer every day. On average, these diagnoses lead to an American dying every hour from skin cancer, usually from Melanoma, the most deadly form.

Whilst Melanoma Monday aims to increase the public’s knowledge of how to prevent putting yourself at risk of skin cancer, many people have grown up without hearing this message. Therefore the most important thing to take away must be that to have the greatest chance of survival,  you must recognize the changes in your skin and find anything suspicious as early as possible.

The chances of you getting an early diagnosis are slim, however, as the average citizen is unaware of what the dangers are and what they should be looking for. When it is considered that more people get skin cancer than the combined incidence of cancers of the breast, prostate, lung and colon, the importance of Melanoma Monday becomes clear.

How to spot signs of risk

So now you know the dangers of Melanoma, what can you do to increase your chances of finding possible skin cancers early enough to have something done about them? As an increasing amount of the world’s problems, the answer could be in your hand right now.

SkinVision is an application that aims to empower people to learn more about their skin and allow them to check for early signs of skin cancer themselves, increasing the chances of them seeing a doctor in time if a mole is suspicious. SkinVision is the first melanoma app certified in the EU and backed by extensive clinical trials and several hospitals globally.

The technology is designed to complement visits to a Primary Care Physician or Dermatologist by providing a mobile solution for assessing and tracking moles, with an 88% accuracy rate for melanoma. In New Zealand alone, it has found 500 incidents of melanoma, squamous cell carcinoma and basal cell carcinoma early in its first year.

The app is currently undergoing trials at the FDA. US citizens can register for early access here. Until then, remember your ABCDE’s of Melanoma to spot the warning signs of a possible malignant mole:

A – Asymmetry: is the mole asymmetrical? If you imagine a line drawn across the center of the mole, if the two halves do not match then they are considered asymmetrical.

B – Border: does the border or edge of the mole look uneven? If so, that might be a sign of risk.

C – Color: is the mole one uniform color? If there are several colors or shades of a color within a mole this could be a warning sign.

D – Diameter: how big is the mole? Melanomas often have a diameter of 6mm (1/4inch) or more (diameter is the length across the mole).

E – Evolving: has the mole changed in shape, size or color? Have you noticed any other changes such as bleeding, itching or puss coming from the mole? These may be signs of a malignant mole.

Here are some photo examples of melanoma, so you know what to look out for.

If you spot any of the signs above or feel uncomfortable about a mole on your body, always go and see your doctor for a closer look. For a first self-check, download SkinVision now: