Melanoma is a skin disease affecting approximately 132,000 people globally each year. While it is the rarest form of skin cancer, it is also the deadliest. That’s why knowing what it looks like is key to catching it early and preventing it from spreading deeper into the body. Below we go over the common symptoms of melanoma so you can know how it looks and what you should watch out for on your skin. Below are some melanoma and skin cancer pictures so you know what to look out for.

Melanoma typically develops from a new or pre-existing mole. It can also start as an unusually pigmented growth or lesion and can occur anywhere on the body. The best way to spot any new or abnormal growth is to first understand what is normal for your skin. This means examining your body from head-to-toe, noting any blemishes or marks.

What is a normal mole?

Moles and blemishes are natural, and, usually, perfectly ordinary features of our bodies. Most adults will have anywhere from 10 to 40 moles on their bodies by the time they reach adulthood. The trick is knowing when a mole is safe and when a mole could mean skin cancer. A normal mole or blemish will be even in color, quite small and will have appeared during the early part of your life.

Most importantly, a normal mole will arrive and stay the same. It won’t change or evolve. 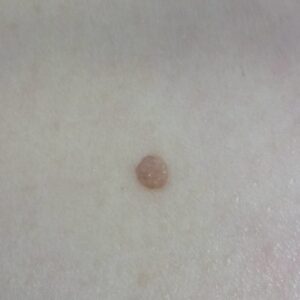 You should be concerned if your mole exhibits any of the following symptoms:

·  indistinct, uneven and/or blurry borders
·  is asymmetrical and strangely shaped
·  is multiple colors
·  is bigger than ¼ inch (about 6 mm) across
·  develops a crust, scab or starts to bleed
·  feels itchy or tender
·  swells or increases in size
·  feels firm or raised in the center 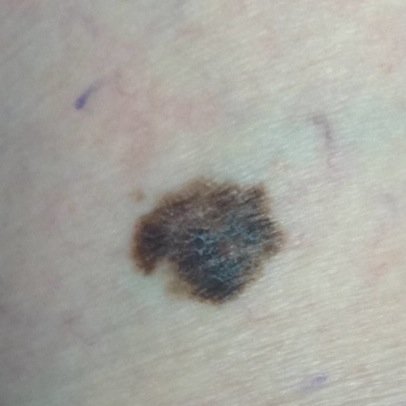 Example of a melanoma mole.

Dermatologists identify melanoma symptoms using the ABCDE method. This method shows you which signs to look out for when examining suspicious moles, spots or growths on your skin.

The evolution of your mole(s) has become the most important factor to consider when it comes to diagnosing a melanoma. Knowing what is normal for YOU could save your life. If a mole has gone through recent changes in color and/or size, bring it to the attention of a dermatologist immediately.

If you notice one or more of these symptoms, contact a doctor or dermatologist immediately. Here are some further photos to help you know what to look out for.

While melanoma typically begins as a mole or new growth, if it has advanced to the lymph nodes, organs or other areas of the body, the symptoms can manifest in more physical ways.

Some advanced stage symptoms of melanoma include:

·  hard or swollen lymph nodes (these are located throughout the body but large groupings are around the neck, armpits and groin regions).
·  hard lumps in your skin
·  shortness of breath, chest pain, noisy breathing or a cough that won’t go away
·  pain in your liver (located on the right side of your stomach)
·  achy bones
·  a headache that won’t go away
·  bowel issues and constipation
·  chronic fatigue

If you notice any of the above symptoms, contact your doctor immediately. While they may be signs of another illness, it’s important to get them checked out. 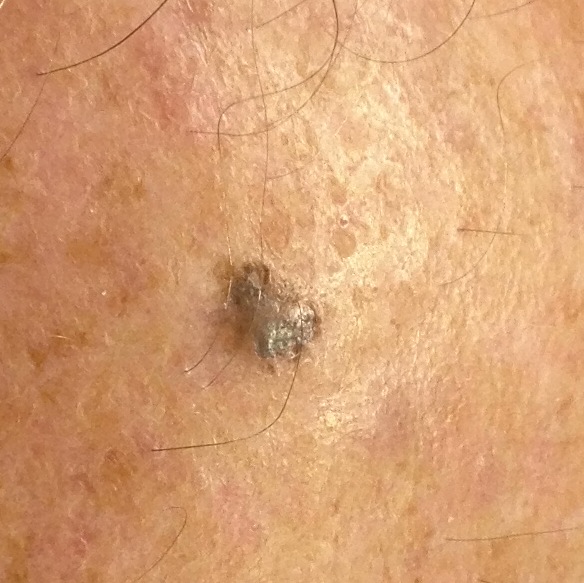 Example of melanoma on the head.

Other symptoms of melanoma

In the other instances when melanoma doesn’t develop from a mole, it may show up in places you would never think to look or in forms you would never expect. Familiarize yourself with these rarer forms of the disease so you can spot these warning signs, too.

Narrow dark streaks under the nails

Acral lentiginous melanoma will often form under the nails or toenails as a narrow, dark streak. It usually develops on the thumb or the big toe, but it can occur on any nail. This is more common in people with dark skin but can occur in all skin types. It can also sometimes appear on the palms or soles of the feet as a dark spot or patch.

A dark spot on the iris or vision problems

Ocular melanoma is a very rare form of melanoma that presents itself as a dark spot on the iris, a change in the shape of the pupil, poor or blurry vision or as the appearance of flashing lights or floating specks.

Mucosal melanoma can appear as sores that won’t heal in your mouth or nasal passages, or in other areas of the body that produce mucous such as the vagina and anus. If you notice any sores in these areas that won’t heal and cannot be explained by other causes, see your doctor and have them checked out.

The best way to catch melanoma early is by paying attention to your body and noticing any changes or new additions. It can be overwhelming to try to remember all of the symptoms, that’s why if you think anything looks suspicious or just doesn’t feel quite right, it’s best to contact your doctor immediately for a diagnosis.

When to see a doctor