White spots on the skin from tanning: what do they mean?

Doing a skin self-check? Download SkinVision now and get an instant risk indication for skin cancer.

If you make use of tanning beds, then fungus could be the cause of your white spots. Tanning beds are known to be breeding grounds for fungus because they are often humid environments where many bodies have sweat and come in contact with the same surface.

Once the tanning lights are off, bacteria can multiply in the darkened, wet space. While it is not precisely clear how often fungus is contracted from tanning beds, and although many tanning salons have strict sanitation procedures, it is worth checking with your doctor if notice any suspicious white spots on the skin.

Tinea Versicolor is a condition that occurs when a natural yeast found on the skin called pityrosporum ovale grows uncontrollably and begins to change the skin pigmentation of the skin. When this happens, patches of skin may become lighter or darker.

Tinea versicolor can be caused by a variety of factors including hot weather, oily skin, a weakened immune system, hormonal changes, and excessive sweating. This skin condition is commonly found among adolescents and young adults, while it frequently appears in adults when they visit warm and humid climates.

Tinea versicolor can typically be treated with over-the-counter anti-fungal medications, which efficiently remove the discolored patches or spots. If these medications don’t work, you are advised to contact your doctor for further tests to confirm you suffer from tinea versicolor. A doctor may prescribe a topical cream or prescription pills to treat it.

Many people can eliminate the infection entirely, but the skin may remain discolored for some time after the treatment, ranging from weeks to months. The disease can sometimes also flare back up, especially if the patient returns to a warm environment or takes hormonal medication.

Sometimes tanning will make pre-existing skin pigmentation conditions more pronounced. Vitiligo is one such condition. It is a disease in which the skin forms white patches. It occurs when melanocyte cells stop producing melanin, either because they die or because they stop functioning.

Causes of vitiligo are unclear, but this skin condition is thought to be an autoimmune disease. It can appear at any age and on any part of the body. Sometimes, the white patches will spread throughout the body, while other times they will remain the same size. Vitiligo often appears initially as a small, pale spot on the skin that, over time, will develop into a larger patch. 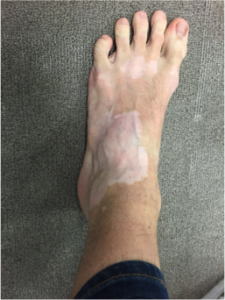 Vitiligo is generally harmless and not contagious, but its aesthetic appearance can cause emotional and psychological distress in people who suffer from it. Several treatments can help reduce the appearance of vitiligo, including corticosteroid creams, depigmentation treatments, and UVA and UVB phototherapy.

Some of these treatments come with side effects, so it is recommended to discuss options with a doctor.

Lichen sclerosus is a rare skin condition that creates thin patches of white skin. These patches can become more obvious and pronounced with tanning. This type of white spots on the skin is a long-term condition that usually affects the skin of the genitals.

It is most common among women who have gone through menopause, although men and children can also be affected. Typical symptoms include smooth white patches on the skin that join together and become cracked or sore, itchiness, fragile, wrinkly or thickened skin, blisters, and pain when having sex or going to the toilet.

While the cause of lichen sclerosus is unknown, hormonal imbalances are a suspected factor as well as an overactive immune system. It is not contagious and cannot be spread through intercourse.

There’s currently no cure to the condition but symptoms can be managed with the use of steroid creams and ointments. When used correctly, the creams usually help ease or alleviate symptoms entirely.

Sometimes the white spots are merely scars that have become more visible after tanning. These areas of the skin have lost their pigmentation due to damage to the tissue. When tanning, the scars stand out from the darker skin around them.

Besides causing white spots on the skin, tanning can cause other serious concerns for your health; namely, skin cancer. UV radiation is widely considered the number one factor contributing to skin cancer and tanning puts you directly at risk. Find out how you can protect yourself from the sun and UV rays.