Melanoma symptoms: what it is, causes and more

Melanoma is the least common type of skin cancer, but it is the most deadly. But do you know melanoma symptoms?

According to the World Health Organization, there are about 132,000 new cases of melanoma worldwide each year, and research suggests that this number will only increase as the ozone layer depletes and exposes more harmful UV radiation to the earth.

If caught early though, melanoma is highly treatable with a 95% five-year survival for stage IA. This means that melanoma prevention and early detection lies within our hands. With proper sun protection and vigilant skin checks, we greatly lower our risk of melanoma.

The first step is to know what to look out for. Learn the basics of melanoma below and find out how to identify symptoms in your skin.

Melanoma begins in melanocyte cells found in the innermost layer of the epidermis (the top layer of our skin). It occurs when those cells behave abnormally, growing excessively and taking over surrounding tissues. Melanoma can develop from existing moles or skin growths, but, more commonly, they will start as a new growth.

Melanoma is considered the most dangerous form of skin cancer as it typically will spread to other areas of the body, including organs if left untreated. Non-melanoma skin cancers, such as squamous cell carcinoma and basal cell carcinoma, are generally considered less dangerous as they are less likely to spread and can usually be treated with a simple surgery. Melanoma can occur anywhere on the body, including areas not exposed to the sun, like inside the mouth or the palms of the hands. Men are more likely to get melanomas on their back while women are more likely to experience them on their legs.

Melanomas are caused by gene mutations. And while there are things that increase the risk factor for developing the gene mutations that cause melanoma, doctors are still unclear on how these factors trigger melanoma to form. 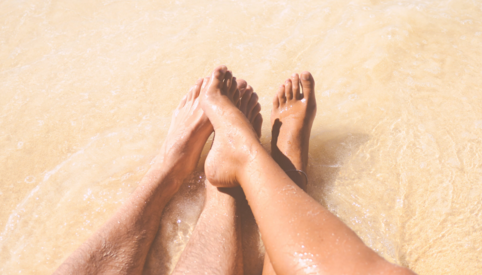 According to the American Cancer Society, most of the gene changes commonly seen in melanoma cells are not inherited. In fact, most cases of melanoma are likely caused by radiation from sunlight; some studies even put incidences of skin cancer caused by sun exposure at around 95%. The UV(ultraviolet) rays from the sun damage skin cells’ ability to repair DNA. When this happens, the risk of cancer increases.

Some melanomas, especially those formed in areas that aren’t regularly exposed to sunlight, exhibit different gene changes. And it’s important to note that the risk of melanoma increases if someone in the family has had melanoma, with gene mutations being passed from one generation to the next.

If melanoma is found early, it can often be cured through relatively simple surgery. But if it is caught at a later stage, it can spread to other areas of the body and be more difficult to cure.

What are the symptoms of melanoma?

Melanoma appears on the skin as a new spot or growth or a change in an already existing mole. 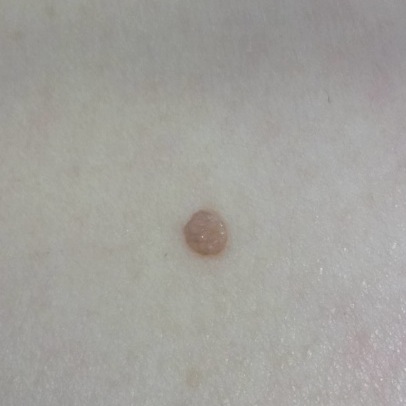 A normal mole will be even in color, quite small and will have appeared during the early part of your life. Most importantly, a normal mole will arrive and stay the same. It won’t change and it won’t evolve. That is what really makes it normal.

Dermatologists classify melanoma using the ABCDE method. This method shows you which signs to look out for when examining suspicious moles, spots or growths on your skin.

The Melanoma ResearchFoundation provides a handy overview of the method you can reference when performing skin checks:

If you notice one or more of these symptoms, contact a dermatologist immediately.

Your skin is always changing – in fact, your skin replaces itself all the time. So if you see something on your skin that doesn’t go away over the course of a month or so that means it sits in the lower layers of skin. These weird skin abnormalities should be checked out – they could be melanoma symptoms.

It is even better if you can keep track of the size and shape of your moles and spots so that you will be able to show your doctor a timeline to help with diagnosis.

When your mole, spot or growth is acting strange

We all have moles and marks on our skin, and in almost all cases, they are a normal reaction to sun exposure and are not dangerous. But if your mole is taking on some strange characteristics, the time has come for a second opinion. To recap, see your doctor if a mole or skin growth:

· develops a crust or a scab
· sometimes bleeds
· is itchy
· feels tender
· is getting bigger or swelling
· is strangely shaped (ie. not round)
· has borders that are irregular
· includes lots of different colors or shades
· is bigger than the size of a pencil eraser in diameter
· has appeared recently (ie. when you are an adult)

The best way to prevent melanoma is to limit your sun exposure and apply sunscreen frequently. Those with fair skin are more at risk for developing melanoma as they have lower amounts of protective melanin (pigment) in their skin. It’s important to check your body from head-to-toe frequently to detect any dangerous changes in moles or spots early.

If you have any concerns about a spot or growth, get in touch with a doctor or dermatologist immediately to have it checked out. While the vast majority of moles and body marks are not cancerous, it’s always better to be safe than sorry.

PrevPreviousSymptoms of Skin Cancer on the Face
NextBasal cell carcinoma (BCC): What to knowNext

More about this topic:

Candy’s Testimonial: How the SkinVision App Revealed my Husband’s Melanoma

How to keep a healthy skin in the summer | 5 tips