Home » Library » White spots on the skin (with pictures)

White spots on the skin (with pictures)

New white spots on the skin can trigger an alarm. You may wonder why they suddenly appear, and for what reason. Understanding the most critical causes of depigmentation on the skin is the best way to answer questions and ease fears.

Take a look below at some of the most common skin disorders known for causing white spots on the skin and get acquainted with their symptoms. It is important to note that you should never rely only on a self-diagnosis; actual diagnosis and advice for an appropriate treatment requires a visit to your doctor.

Tinea Versicolor is a condition that occurs when a natural yeast found on the skin called pityrosporum ovale grows uncontrollably and begins to change the skin pigmentation of the skin. When this happens, patches of skin may become lighter or darker. Tinea versicolor can be caused by a variety of factors, including hot weather, oily skin, a weakened immune system, hormonal changes, and excessive sweating. This skin condition is commonly found among adolescents and young adults, while it frequently appears in adults when they visit warm and humid climates. 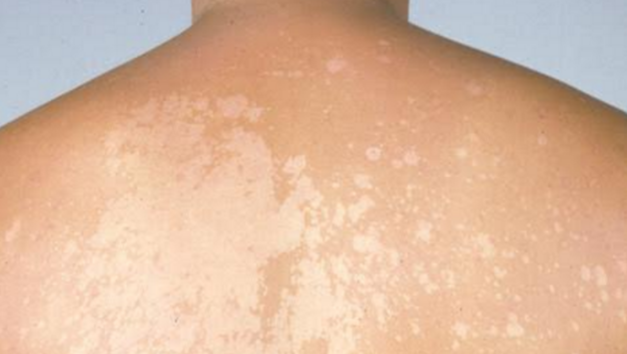 Tinea versicolor is often treated with over-the-counter anti-fungal medications, which efficiently remove the discolored patches or spots. If these medications don’t work, you are advised to contact your doctor for further tests to confirm you suffer from tinea versicolor. A doctor may prescribe a topical cream or prescription pills to treat it. Many people can eliminate the infection entirely, but the skin may remain discolored for some time after the treatment, ranging from weeks to months. The disease can sometimes also flare back up, especially if the patient returns to a warm environment or takes hormonal medication.

Lichen sclerosus is a rare skin condition that creates thin patches of white skin. It is a long-term condition that usually affects the skin of the genitals. It is most common among women who have gone through menopause, although men and children can also be affected. Typical symptoms include smooth white patches on the skin that join together and become cracked or sore, itchiness, fragile, wrinkly or thickened skin, blisters, and pain when having sex or going to the toilet.

While the cause of lichen sclerosus is unknown, hormonal imbalances or an overactive immune system are suspected factors. It is not contagious and cannot be spread to other people through intercourse. Although there is currently no cure for the condition, symptoms can be managed with the use of steroid creams and ointments. When used correctly, the creams usually help ease or alleviate symptoms entirely.

Read more: What does a normal mole look like?

Eczema, also known as atopic dermatitis, is a skin condition that causes red, itchy, and dry skin as a result of inflammation. Sometimes white patches or spots can appear within a red rash. This condition is typically found in children but can continue into adulthood. Eczema symptoms include dry, scaly, thickened skin that is almost always itchy. Especially among darker-skinned people, eczema can cause skin discoloration, making the affected area lighter or darker than the surrounding skin.

The cause of eczema is unknown, but it is thought to be linked to allergies and asthma and is suspected to be an overactive immune response to an irritant.  While there is no cure for the condition, symptoms can be managed. For many people, eczema will even go away over time. Doctors can prescribe topical corticosteroid creams and ointments, oral medications, and light therapy to help ease symptoms.

Pityriasis alba is a skin disorder commonly found in children and young adults that causes pale pink or red, scaly patches to form on the skin. When these patches clear up, the skin is left discolored, with smooth, light patches taking their place. Lesions can be round, oval or irregular in shape, and many patches can occur at once, especially on the face and arms. Pityriasis alba is believed to be associated with eczema and, as such, an overactive immune response is a suspected cause.

Patches may clear up within a few months or, in some cases, can last for several years. No treatment is required for pityriasis alba as the spots usually go away over time, with most cases disappearing by adulthood. However, a doctor will often prescribe a steroid or non-steroid cream to ease the dryness or itching. In some cases, the patches can flare-up in the future and require further treatment.

Read More: Early melanoma symptoms and how to spot them

Idiopathic guttate hypomelanosis is a disorder that causes 1 to 10 mm flat white spots to occur, typically on the shins, arms, upper back, and face. It is usually found in fair-skinned individuals but can also appear in dark-skin. While the exact cause is unknown, these white spots often begin to form as a person ages, usually after the age of 40.

The spots are benign and are thought to be brought on by sun exposure, which kills melanocyte cells in the skin. No treatment is usually needed, but preventative measures to block against sun damage should be taken. Topical steroids, creams, and dermabrasion can be used to minimize the appearance of the spots.

Vitiligo is a disease in which the skin forms white patches. It occurs when melanocyte cells stop producing melanin, either because they die or because they stop functioning. Causes of vitiligo are unclear, but this skin condition is thought to be an autoimmune disease. It can appear at any age and on any part of the body. Sometimes, the white patches will spread throughout the body, while other times, they will remain the same size. Vitiligo often appears initially as a small, pale spot on the skin that, over time, will develop into a larger patch.

Vitiligo is generally harmless and not contagious, but its aesthetic appearance can cause emotional and psychological distress in people who suffer from it. Several treatments can help reduce the appearance of vitiligo, including corticosteroid creams, depigmentation treatments, and UVA and UVB phototherapy. Some of these treatments come with side effects, so it is recommended to discuss options with a doctor.

Read more: Skin Pigmentation: What it is and common disorders

What causes white spots on skin?

3 min readMost of us have patches of skin that have, for some reason, lost the correct pigmentation and are left white – compared to the rest of the normal colored skin. These white spots […]

3 min readMost of us are aware of the usual signs of skin cancers – moles that look strange or start to change in shape or become itchy or crusty. But squamous cell carcinoma is […]

3 min readNew Zealand and Australia have the highest rates of skin cancer in the world. With a large amount of fair-skinned people, lots of sunshine and outdoor lifestyles, it is a perfect storm for […]

3 min readIt is important to recognize and have a medical assessment on any changes to your skin to minimize the risk of any serious complaints such as skin cancer or melanoma. Red spots on […]

2 min readWhen it comes to skin cancer, detecting it early is key. If skin cancer is found early there will be more treatment options. This is even more important with melanoma, the most dangerous […]

3 min readMelanoma is the rarest but deadliest form of skin cancer. Just why it is so deadly is revealed in the way that it forms. It is important to know how melanoma forms so […]

3 min readWidely recognized as one of the most common forms of cancer in the world, skin cancer can be readily treated if diagnosed early. With that in mind, it is vital to recognize symptoms […]

2 min readExamples of melanoma cases give you an overview of what you need to look out for. Melanoma images display the range of signs produced by the disease and provide a tool to help you recognize […]