First symptoms of melanoma: the three symptom types to watch out for

Please keep in mind that this is by no means an exhaustive list of symptoms. Melanoma can take many different forms. A dermatologist is the one who can give an actual diagnosis.

Melanoma usually appears on the skin as a new spot or growth or a change in an existing mole.

A normal mole is usually smaller than a pencil eraser, has smooth and symmetrical borders, an even color, and stays about the same over time. 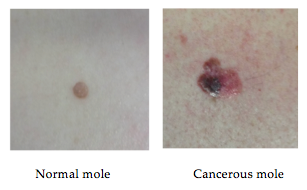 While the vast majority of moles are not cancerous, new moles should always be something to keep an eye on. The faster they appear and evolve, the greater the reason to be concerned. Take note of all your moles and make sure you conduct monthly skin self-exams to track any unusual changes.

To help you with this endeavor, dermatologists have created the ABCDE melanoma self check method.

This helpful acronym names all the symptoms that could indicate the occurrence of melanoma. Here’s a quick guide:

Be sure to contact your doctor if you notice anything that looks suspicious.

First symptoms of melanoma: A change in texture

Catching suspicious moles goes beyond just appearance. How a mole or other spot feels is often just as important an indicator of risk.

Think twice if a mole or other skin spot:

The above could be signs that the mole is cancerous and you should have it checked immediately.

The three symptom types to watch out for

The hidden-in-plain-sight symptoms of melanoma

There are rarer forms of melanoma that don’t appear on the skin as a mole. These more insidious forms of melanoma often occur in locations that we don’t expect or they might have an appearance that we think of as harmless. The following symptoms are more difficult to spot, but it is important that you can identify them if they occur.

Download SkinVision and check your skin for (early) symptoms of melanoma before they have a chance to spread.